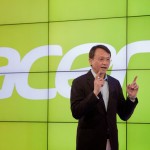 Yesterday at Acer’s Worldwide Global Press conference, CEO Jason Chen showed off a new series of tablets and laptops that sported a colorful new design. Acer also showed a glimpse of the first Chromebooks to sport an Intel Core i3 processor.

Acer first showed off their new Switch 10 System. It’s a hybrid 10-inch Windows 8.1 PC. The keyboard detaches with a special magnetic hinge and snaps back into place quickly, easily, and securely. It is made of aluminum, has two front facing speakers and operates in four modes: laptop mode, tablet mode, display mode, and tent mode.

There were also two different 7-inch Android tablets. The Acer Iconia One 7, which has a dual-core 1.6GHz Intel Atom Z2560 processor, a 1280 x 800 display, and Android 4.2 operating system. It also comes in 10 different vibrant colors and will ship out in June for about $130.

The second tablet, the Acer Iconia Tab 7 is a slick looking all silver tablet that runs on a quad-core MediaTek processor. It has an IPS display with zero air gap, Android 4.4 and has 3G connectivity for making calls and transferring data. Both of the new tablets come with front facing 3 megapixel cameras, but this one has a better camera on the back. It is a 5 megapixel camera, and the Iconia One 7 has a 3 megapixel camera on the back. There is no word on when this will be released in the U.S., but it will be shipping to Asia and Europe in June.

The next item they showed gives users the best of both worlds. The Acer Aspire U5-620 is a 23-inch all-in-one desktop, but it also lays flat like a giant tablet for table-top computing. It features a 1080p display, a full HD webcam, and dual microphones. It also comes with a 4th generation Intel Core Series processor and the option of adding Nvidia graphics. This will, like the other new items, be shipping in June for $999.

One of the most exciting things Acer showed off was the new E Series Laptops. The Acer Aspire E15 and E14 both come with either Intel or AMD processors, touch screens or standard screens, and the choice of standard screen resolution or full HD resolution. They both offer up to 7 hours of battery life and a new touchpad that they promise will have better accuracy for multitouch gestures. They will both be available in multiple different colors and will ship in June starting at $299.

The last device to be shown was the Aspire E11. This 11-inch Windows notebook uses a fanless design and is extremely thin because of it. It has a very nice “rounded” design and comes in 11 different colors. The Acer Aspire V11 is the same as the E11 but comes with a touch screen. Both have a 1366 x 768 resolution, Pentium or Celeron CPUs and up to 1TB of internal storage. These will both be available in June as well. It looks like June is going to be a big month for Acer fans.

2014-05-01
Previous Post: Lenovo Has A New Line Of ThinkPads To Get College Kids Ready For Summer Courses
Next Post: Apple’s Macbook Air May Experience Some Speed Issues For Reasons You Wouldn’t Expect