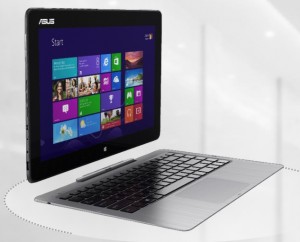 PC maker Asus has taken the idea of Windows and Android hybrids to the next step with a really cool convertible laptop that can actually switch between the two different operating systems with a simple click of an on screen button.

The new, revolutionary laptop is called the Asus Transformer Book Duet TD300. It has a 13.3 inch display and comes with a detachable keyboard, so it can function as a laptop or a tablet. Unlike other convertible laptops, this new Asus laptop can switch between Windows and Android operating systems in either laptop mode or tablet mode.

There is an “OS Switch” button located on the devices screen. When pressed, the product will switch to the alternate OS in only 5 seconds without rebooting. It is powered by Intel’s fourth generation Haswell chip. It will be available in late March with a price tag starting at $599.

That’s not the only thing Asus has up their sleeve for this year. At the international CES show, they announced that they would finally release their Padfone in America in partnership with AT&T. The newest model is called the Padfone X. For those of you who don’t know, the Padfone is another hybrid model that turns the smartphone into a 3G tablet.

Like all of the models before, the Padfone X  is an Android smartphone that can slide into the back of the included tablet. The phone part has a 5-inch display with a 2300mh battery, and the tablet portion has a 9-inch screen and its own battery. They are also releasing the Padfone Mini, which will be a 4 inch phone and 7 inch tablet. They will be released mid year and have the latest Qualcomm processors and will have full 4G support.

As if that wasn’t already enough to get you excited, Asus also unveiled a new series of Android smartphones called Zenfones. They will be released sometime in the first quarter of this year in markets outside of the United States. The Zenfone will come with 4, 5, and 6-inch screen versions. All of the variants will use Intel’s Atom processor.

Looking to rent the latest in mobile technology from your favorite manufacture? Click here or call 888-736-8301 to lean how RentOurLaptops.com can help!

2014-01-10
Previous Post: Finding The Best Laptop For Your Specific Needs
Next Post: Samsung Ativ Book 9 Plus Could Be The All-Purpose Laptop You Need