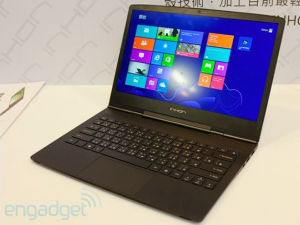 If you are looking for that amount of power in a small package, the Carbon is cheaper costing $1,350, while a less attractive  1,600 x 900 fiberglass version (12.6mm and 2.6 pounds(1,195g)  will run a grand or so. The models should be available in Taiwan around June, There is no indication that the thinner lighter laptop will be available in the United States.