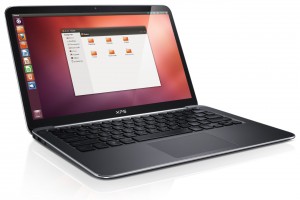 Ubuntu Linux laptops seem to be all the rage right now. I just wrote about System76 releasing a new Ubuntu Linux laptop and now it seems that Dell has jumped on the bandwagon as well. After tinkering with the final product for months, Dell has finally started shipping the new thin-and-light XPS 13, which comes with the Ubuntu Linux 12.04 LTS, code-named Precise Pangolin.

This laptop was developed as a part of an internal project from Dell known as “Project Sputnik”. Over the course of six months, Dell worked with the open-source community in order to develop tools, drivers and software for the OS to work with XPS 13, which has a similar frame to an Ultrabook.

The new XPS 13 comes with an Intel Core i7 CPU, 8GB of RAM and a 256GB hard drive. There is also a 13″ screen, though no information has been released about the overall weight or battery life.  Dell has begun selling the XPS 13 for a base price of $1,549 with one year on-site support as a package deal. That is a little pricier than Dell’s currently available XPS 13 with Windows 8, priced at $999.

Dell describes the new XPS 13 with Ubuntu as a developer edition, though also mentioned that it will sell the product to enterprises and consumers as well. According to Vice President of Dell Cloud Nnamdi Orakwue, “The XPS 13 with Ubuntu gives developers the essentials they want while staying true to our core values of openness and affordability.”

The joint development of the laptop has led to some new features that are unique to this particular laptop. One of those is called the “Profile Tool”, which allows developers to easily set up software development environments through quick access to tools for Ruby, JavaScript and Android in the github repositories.

Even though this isn’t the first laptop or netbook to come from Dell with Ubuntu Linux, it is one that the company has much bigger plans for. Usually Dell provided install images of the Ubuntu OS, but has not collaborated with the open-source community on a wide scale. Dell is committed to open source, and development around Linux and the laptop will continue, according to the company.