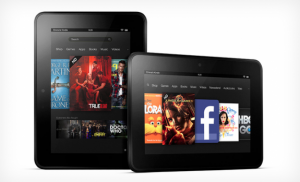 GameStop is known for selling one thing…games. I mean, the word is even in the name of the store. It might not give out deals as TheBlackFridayHQ.com gives, but anything video game related can be found at your local GameStop. However, the company is starting to change that. GameStop recently began selling refurbished iPods to customers and now, it seems, will be offering Amazon’s Kindle Fire to customers as well.

GameStop has been struggling lately, and this partnership could prove to be beneficial for both companies. The sale of Amazon Kindle products at GameStop stores could provide GameStop with some much needed foot traffic as business has dampened due to online game retailers. In addition to that, this merger could also let consumers see and use the Kindle tablets in person, something that isn’t often available.

Amazon hasn’t budged on lowering prices for its tablets, except for on Black Friday of course, so GameStop will be resorting to a different tactic to get consumers in. The retailer will offer customers a free $25 Amazon gift card when they purchase a Kindle Fire. You can also trade in an old Kindle Fire to GameStop and receive up to $100 in store credit.

It’s tough to say whether or not this move will help sales for either company, but GameStop is willing to try anything to get people back in the doors. There is no word yet on when this is actually going to happen, or if it will happen before the holidays, though GameStop might want to get on that if they want to make a good turn around.