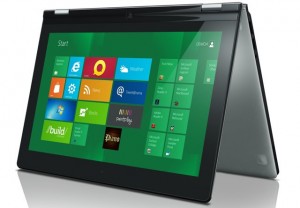 The CEO of Lenovo recently stated that he expects the market will gradually move away from entertainment-focused tablets in favor of convertible PCs, which he said can strike a balance between the functions of touch-based tablets and the productivity of a laptop. According to CEO Yang Yuanqing, “From our competitor’s recent earnings announcement, you can find that the emotional attachment to tablets has gone down.”

Even though Yuanqing didn’t name a specific company, he appeared to be referring to Apple and its sale of 14 million iPads in the last quarter, a figure that was well below the predictions of Wall Street. During the quarter, Apple also saw its tablet market share decrease to 50.4%, though the company’s  iPad sales are expected to pick up with the introduction of the iPad Mini and the fourth-generation iPad.

Yuanqing, however, questioned whether consumers would continue buying tablets. In another “reference” to Apple, Yuanqing stated that people would think seriously about buying a tablet from an expensive brand with less innovation than before when they could buy a more powerful convertible PC. “I think the market will become more realistic in the future.”

Lenovo is launching two convertible tablets along with the release of Windows 8 that belong to the company’s IdeaPad Yoga family. Both devices work as laptop/tablet hybrids and, according to Yuanqing, “I still believe the Yoga type of convertible is more usable, more user-friendly. Definitely that’s the better product. That will be the future of the PC.”