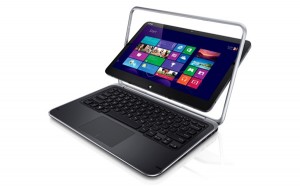 Windows 8 is all set to be released in about two weeks, so, naturally, Microsoft’s hardware partners are scrambling to announce their new systems that will be running the operating system on launch. Just the other day, Sony revealed its very own Windows 8 lineup while Lenovo did the same thing earlier in the week.

Dell has decided to follow suit with its announcement of three new systems. One of these devices is the XPS 12 Convertible Touch Ultrabook, which combines laptop and tablet features as well as a hinged design that allows you to flip the device from laptop state to tablet/slate state.

There is also the Inspiron One 23, which offers a 23″ display with a 1,920 x 1,080 resolution and an Intel Pentium G645 processor. This device also comes with 4GB of RAM and a 500GB hard drive as well as a DVD burner and built-in WiFi. This one, however, will only cost you $799.99. All of these new models will begin shipping as soon as Windows 8 becomes available to the public on October 26.