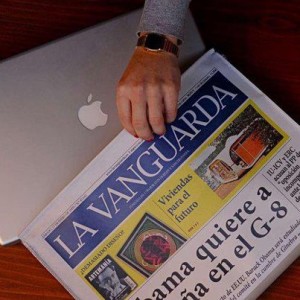 Thieves will take pretty much anything they can get their hands on if they think they can get some quick cash from it, especially technology like smartphones and laptops. In fact, laptops are some of the most stolen devices as they are easily transportable and can exchange hands quickly. However, there is a new laptop case that could deter thieves from ever stealing your laptop again. Then also very much consider buying a case for your laptop if you ever take it anywhere as they can save huge damage if you should ever drop it and also look great too.

A new case from The Fancy, known as an Urban Camouflage case, is the spitting image of a newspaper. That’s right, you can easily disguise your laptop as one of the most useless things on the planet, ensuring that no one will ever give it a second look!

The case is essentially a cushy sleeve that looks like a newspaper on the outside. The only real catch is that the newspaper isn’t in English, it’s in Spanish, which isn’t a major drawback but something that could make people actually focus on your laptop even more.

The Fancy is selling these cases for $80 on its website, so if you have an intense paranoia that someone is going to steal your laptop the second you turn your head, then disguise it as a Spanish newspaper, because nothing disinterests criminals more than a newspaper that they can’t even read!

If you aren’t that paranoid, you can still get the case for the purposes cases are intended for, protecting your laptop and keeping it from getting dirty or broken. There are a lot of different cases out there to choose from, though this one is definitely one of the more interesting ones. Pick up your very own Urban Camouflage laptop case at The Fancy right now.

2012-10-04
Previous Post: Ultrabook Not the Success Some Thought It Would Be
Next Post: Rent Technology in Boston