Acer Shows Off New Laptops, Tablets and Hybrids at IFA 2012 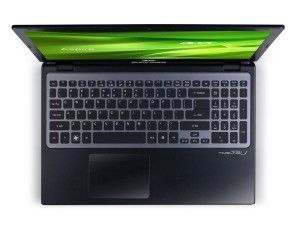 Acer was quite active at the IFA 2012 trade event in Berlin recently, unveiling a brand new tablet and tablet hybrid as well as two new versions of laptops. The laptops will come supporting Windows 8 and are your typical devices containing large, sunken chiclet keyboards with numeric keypads and instant-on characteristics that you typically find in smartphones or tablets.

The Acer M3 measures 0.9″ thin and weighs in at 5 lbs. In addition to that, it features a frameless, 15.6″ display inside a dark aluminum chassis. The M3 also runs a third-generation Intel core processor along with an Nvidia GeForce GT640M GPU that is capable of handling graphics-intense games and HD video streaming.

The green instant-on technology that Acer has included also means that the M3 can come out of sleep mode in 1.5 seconds or in 2.5 seconds when attached to a WiFi connection, speeds that Acer claim are 4 times faster than usual.

Acer also showed off the Aspire V5 Series. Acer previously noted that the V5 Series of laptops is 30% slimmer than the same class in two-spindle design with DVD and ergonomic thermal, making them extremely easy to use while traveling.

The V5 Series comes in two variations, a 14″ model and a 15.6″ model. The 14″ model is only 0.8″ thin and weighs 4.6 lbs while the 15.6″ model is 0.9″ thin and weighs 5.3 lbs. Both models include optical drives as well as the new, faster USB 3.0 ports. They also run Intel core processors along with Nvidia GeForce GT Series graphics and have efficient power-management capabilities.

The Aspire S7 laptop is definitely the more aesthetically pleasing laptop. This device comes with an 11″ 1,920 x 1,080 full HD display and is reminiscent of Apple’s MacBook Air, coming with a super thin, sleek design and silver paint job.

The tablet and tablet-hybrid devices from Acer come as the W7 and W5. The W5 features a 10.1″ touchscreen, is 3G capable and includes microHDMI and microSD ports. The W7 tablet features an 11.6″ display with a resolution of 1,920 x 1,080 and 10-point touch capabilities. There is also a 5MP camera on board and should have 8 hours of battery life.