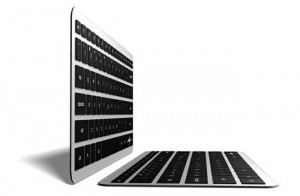 Touch experience on laptops is about to get a major boost, not in the form of touchscreens like the ones seen on the upcoming Windows 8 laptops and ultrabooks, but in a more advanced technology coming in the form of advanced touch trackpads and mechanical keyboards.

Synaptics, a touch solutions company, has debuted the ForcePad, a pressure-sensitive trackpad that recognizes 64 different levels of sensitivity. In addition to that, the company is unveiling its first ever touch keyboard product in the all new ThinTouch.

Both of these offerings are designed to support manufacturers’ quest to make thinner laptops and upgrade the Windows 8 experience along with it. Both of these new products from Synaptics are up to 40% thinner than the common touchpads and keyboards we currently use, according to the company.

Windows 7 laptops that offer “multitouch” touchpads actually only support a few gestures. The ForcePad, on the other hand, can detect all five fingers simultaneously and whenever you are applying more pressure with a certain finger. This opens up the universe of gestures and controls possible on your touchpad.

Due to the fact that the ForcePad can tell when you are clicking versus tracking, laptops will no longer require dedicated trackpad buttons. This, in turn, will make more room for all the different possible gestures. The ThinTouch keyboard also has an interesting capacitive sensor, allowing you to easily disable the touchpad automatically whenever you start typing. The spacebar may also be turned into a touch sensor.

Laptops on most keyboards are already pretty shallow and most people are used to the tactile click of a physical keyboard. It will be interesting to see how these touch keyboards and trackpads work. Granted, the thought of using a touch keyboard isn’t that farfetched, especially with almost every single smartphone and tablet on the market incorporating them into their design.