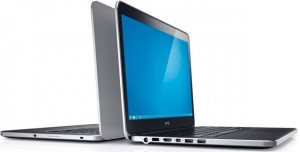 Dell recently debuted two new laptops that are part of the company’s XPS lineup. The new devices include a 14″ clamshell laptop that can be configured as an Ultrabook and a high-powered 15.6″ device as well. In addition to that, these laptops feature an aluminum casing, edge-to-edge display with hardened Corning Glass, backlit chiclet keyboards and multigesture touchpads.

These devices share some specs, including USB 3.0 ports, miniDisplayPort, HDMI out, 3-in-1 media card reader and a 1.3 megapixel webcam. Also, both devices have come with an Ethernet port, though Dell says that the laptops are too thin to offer a full Ethernet option. To remedy this Dell included a hinged Ethernet port that expands to fit a cable whenever you open it.

Not included in the XPS 14 is an optical drive. Dell left this out to save on space with the device measuring only 0.81 inches thick. However, the device is still a little weighty given its thinness. Overall weight for the XPS 14 has come in at 4.6 lbs.