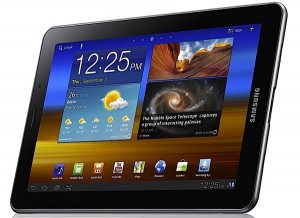 Ever wanted a Samsung Galaxy Tab but couldn’t quite come to terms with paying hundreds of dollars for one? Well, you may be in luck, as Verizon Wireless has just announced that it will offer the Samsung Galaxy Tab 7.7 for $499.99 with a two-year contract on the carrier’s 4G LTE network.

The Galaxy Tab 7.7, which is an Android 3.2-based tablet, comes complete with a 1.4GHz dual-core processor along with a 7.7″ Super AMOLED Plus display that has a 1,280 x 800 resolution. The Galaxy Tab 7.7 also has a 3.2MP rear-facing camera and a 2MP front-facing camera as well as 16GB of on-board storage which can be increased to 32GB via a microSD card slot.

Verizon is marketing this particular tablet as a device perfectly suited for business workers since it comes with mobile device management software, a virtual private network, on-device encryption and push synchronization to email. In addition to that, the Samsung Galaxy Tab 7.7  supports Microsoft Office and is capable of hotspot connections to up to 10 WiFi devices.

In order to purchase this particular model from Verizon, customers will need to commit to a 4G LTE broadband data package. Beginning packages begin at $30 month for 2GB of data, though customers who already have unlimited data plans should be grandfathered in which, I’m assuming, will still work on this device.

The promotion begins this Thursday and there is no word on how long it will last. So if you were ever planning on buying a Samsung Galaxy Tab with 4G LTE capabilities, now is the time because you won’t find a better deal anywhere else. Plus, who doesn’t want a Galaxy Tab for $500? Or maybe you are waiting for the 4G LTE iPad 3 to debut next week?

Source: Computer World – Verizon to Sell Galaxy Tab 7.7 on Thursday for $500 over LTE

Short-throw projectors only require half the projection distance of traditional projectors. The projector can be placed just a foot or so from the screen. This is nice because it keeps the projector and screen near each other instead of having a long throw projector that people can accidentally block.
2012-02-29
Previous Post: New 8GB Nook Tablet Released by Barnes & Noble
Next Post: Gigabyte Unleashes New U2442 Ultrabooks and P2542G Gaming Laptop at CeBIT 2012