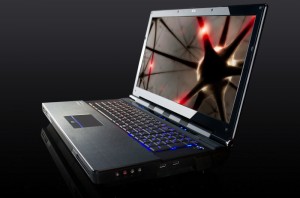 Origin PC has just announced availability of the company’s newest laptop, the EON17-X, which is being touted as a desktop replacement. The laptop features the latest Intel X79 chipset as well as a 2nd generation Intel hexcore processor and overclocked Nvidia GeForce GTX 580M graphics cards in SLI.

As Origin puts it, the EON17-X is the “most powerful laptop on the market for gamers, artists, enthusiasts and professionals.” In addition to that, the EON17-X  marks the very first laptop from the company to come with a customizable backlit keyboard with two lighting zones and seven different color options.

According to Origin PC CEO and Co-Founder Kevin Wasielewski, “Origin is thrilled to answer out customers’ requests by adding a customizable backlit keyboard to the EON17-X. The EON17-X is more powerful than a lot of desktops on the market. With an Intel X79 chipset and dual overclocked Nvidia GeForce GTX 580Ms in SLI you won’t find a more powerful laptop anywhere else.”

Origin PC’s EON17-X ultra-powerful laptop is available now for a base price of $2,818, though Origin has also announced that a 3D model, equipped with a built-in 3D emitter, will be available around the beginning of Q2 2012 so if you prefer 3D, then I suggest waiting a couple more months for that model.