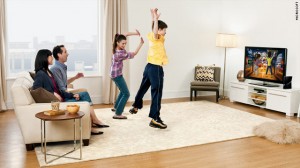 Microsoft has been pushing its Kinect motion control technology ever since it released it on the Xbox 360 not too long ago. The technology is currently only available on the company’s extremely popular gaming console though Microsoft is driving to integrate Kinect into even more products and isn’t showing any signs of stopping.

Back at CES 2012, Microsoft made an announcement that a new desktop version of the motion control technology was in the works. This would essentially allow you to turn on your computer with your voice and use hand motions and voice controls to work your PC. However, that obviously wasn’t enough for the company who also announced that they are hard at work trying to integrate Kinect into laptops as well.

There are currently a few prototypes floating around to different media outlets and tech companies. The devices appear to be standard Asus netbooks with Windows 8 for an operating system. The devices themselves feature a plethora of small sensors that run along the type of the screen where a webcam would normally be located. The bottom of the screen is set with LEDs.

A Microsoft source has supposedly confirmed that these devices are official prototypes of laptops incorporated with a Kinect sensor. As far as functionality is concerned, there are a ton of different ways that motion control could work in a laptop. Obviously gaming is the first thing that comes to mind though Kinect functionality could allow you to switch between programs with the wave of a hand or a voice command.

There is also a lot of potential for Kinect-enabled laptops to assist those with disabilities and help them use a computer like they never have been able to before. It is, however, unlikely that Microsoft will make its very own brand of Kinect laptops. Instead, the company will most likely license the technology to other companies, like Asus, just like the company’s Windows operating system.

The goal of getting Kinect out of the living room and into other technologies is gaining ground fast. Aside from the announcement at CES, it was also reported that Microsoft was looking at making a Kinect-enabled television as well. There hasn’t been any new news on the television in a while so it isn’t clear if that will actually happen but the laptops and desktops with Kinect are definitely shaping up to be a real thing.

Joystiq – Kinect sensors being tested for use in laptops