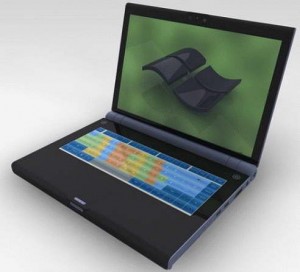 When it comes to laptops, NajmTek probably isn’t a name you would think of and it is probably a name you’ve never even heard. That’s because NajmTek is relatively new to the industry. However, just because the company is new doesn’t mean it isn’t bringing anything new to the table. Quite the contrary, actually, as the company is planning on launching a dial-screen laptop at CES 2012.

Known as the U-Book (which stands for “Universal Notebook”), this dual-screen device is similar to Acer’s dual-screen Iconia which was announced at last year’s CES 2011. Like the Iconia, the U-Book replaces the physical keyboard with a multi-touch screen. It’s kind of like typing on a tablet but with a much bigger surface area.

NajmTek offers many benefits to using a touchscreen keyboard over a standard one on the company website, the most notable being support for multiple languages. This would allow you to easily display Latin, Cryllic, Chinese, German or any other language keyboard with special characters and would allow you to quickly switch between all of them.

The downside to that is there aren’t a lot of people who need multi-language keyboards. The multi-function capabilities are what most people will be drawn to. There will be a plethora of different keyboard layouts available, including ones that display special launch keys, a trackpad, calculator and more.

What is even more interesting, and even more groundbreaking, is that the company promises that users will be able to create and save their very own custom keyboards with the ability to change key colors, hotkeys, button orders and key sizes.

Aside from that, the U-Book is pretty much your standard laptop. Many people may see this as a desktop replacement instead of a highly portable laptop and NajmTek is only showing off simple renderings of the device with brief details about the specs at the moment.

The specs we do have tell us that the device will run on an Intel dual-core or quad-core processor, come with a 250GB or 500GB hard drive and feature an Nvidia graphics card. In addition to that, it will have your standard USB and Ethernet ports, memory card reader, HD webcam and HDMI.

Rack-Mount Server rentalsare ideal if your company needs an extra storage unit for company information while you are testing various types of storage solutions.Whether you need a short-term rental or a long-term lease, we have the right kind of server for your needs.
2012-01-03
Previous Post: New Patent Files by Apple for Laptop Fuel Cells
Next Post: Razer Unveils New “Project Fiona” Gaming Tablet at CES 2012