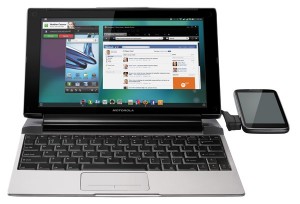 Motorola just recently announced the latest smartphone companion device in the company’s premier line of webtop-enabled smartphones in the Motorola Lapdock 100. This new device allows consumers the ability to utilize the full potential of their smartphone whenever and wherever.

Full multitasking is supported by the Motorola Lapdock 100, making it easier than ever to respond to a new text message or take a call while surfing the internet, viewing pictures, listening to music or even watching videos. This device also makes it easier to use any of the thousands of Android apps that are currently available via the marketplace.

The Motorola Lapdock 100 is compatible with a plethora of Motorola smartphones including the Motorola Atrix 2, Photon 4G and Droid Bionic by Motorola. In addition to that, it will also be compatible with future Motorola webtop-enabled devices. The up to five-hour battery of the device also allows you to use your phone’s battery so you never lose your freedom of mobility.

The Motorola Lapdock 100 will be available online at AT&T’s website on October 17. The device will also become available through Verizon Wireless as well as Sprint later on in the quarter.