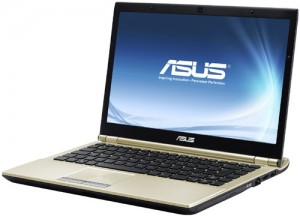 The U46SV-DH51 is a thin notebook that doesn’t quite fall under the category of Ultrabook. Asustek has succeeded, however, in putting a full-voltage Intel Core i5-2410M processor, discrete NVIDIA GeForce GT 540M GPU, 4GB of RAM, a 640GB hard drive and a DVD burner inside a body that measures a mere 1.08″ at its thickest, which is very impressive.

In addition to that, the Asus U46SV also has a brushed champagne casing with a hinge-forward design and has the same thin-bezel style  reminiscent of other thin laptops from companies such as Samsung, Gateway and Dell. Thin bezels allow 14″ 1366 x 768 LED screens to be incorporated into a smaller chassis than that of  a standard 14″ laptop.

The whole device weighs about 4.85 lbs though that number includes the 8-cell battery. The battery itself is said to provide you with up to ten hours of use on a single charge, something mobile enthusiasts will be drawn to. Let’s just hope it actually does what it says.

Similar to the larger Asus U56, the Asus U46SV comes with a full range of common ports and slots that includes HDMI and VGA, two USB 2.0, one USB 3.0, Gigabit LAN and a 3-in-1 media card reader. If that isn’t enough for you, then you also might like to know that the U46SV also comes with a 0.3MP webcam and connections for both WiFi and Bluetooth.

The 14″ Asus U46SV-DH15 ultrathin laptop is available now via Excalibur PC for a base price of $879. The fully finished product is expected to begin shipping on October 1st to pre-order customers and retailers.

Power Point Projectors
Most business class projectors will do a good job displaying your PowerPoint presentation. If you have a small presentation group, a 2000 lumen LCD projector will be able to produce a nice and clear picture. For larger audiences you should consider a 5000 lumen LCD projector.
2011-09-21
Previous Post: New Features for Windows 8 on Your Laptop
Next Post: Asus’ First Ultrabook Gets an October Release Date