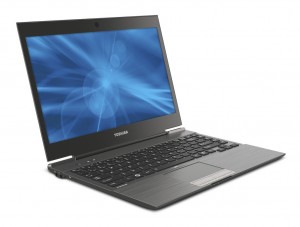 It seems like Ultrabooks are becoming the new craze in the laptop market nowadays as everybody and their brother are planning on releasing one soon. If you don’t already know, an Ultrabook is a 13″ super thin and light multimedia laptop or basically, every other company’s answer to Apple’s MacBook line.

Toshiba is the latest company to unveil their take on an Ultrabook, the Portégé Z830 Series. This is Toshiba’s first Ultrabook to use the second generation of Intel’s Core series of processors and one Ultrabook that brings new meaning to the word portable.

This device weighs less than 2.5 lbs and comes with a 0.63″ profile which makes it nearly 20% lighter and 40% thinner than the previous Portégé R830 Series. This Ultrabook, like most of the other ones on the market, comes with Intel’s latest Sandy Bridge processors as well as DDR3 memory and promises to to give you a nice combination of multimedia performance and substantial battery life.

This particular device offers up a 128GB solid state drive for increased speed and energy efficiency, more so than your typical hard drive. In addition to that, the Portégé also comes with Toshiba’s new “Hi-Speed Start Technology” which is said to allow the notebook to boot Windows in a matter of seconds.

Other features packed into the Portégé Z830 include a full-size LED backlight and spill-resistant keyboard and Toshiba’s USB Sleep & Charge technology which allows you to charge a USB device, like your iPod, camera or smartphone, via the laptop even when it is in Sleep Mode.

The Portégé Z830 is said to be available sometime in November 2011 at select retail stores or through Toshiba’s Preferred Partner Program resellers and directly from toshibadirect.com. Base price for the Portégé Z830 Ultrabook is slated to be “under $1,000” according to Toshiba, though that could easily mean $999. Check back here for more info on Toshiba’s newest Ultrabook, the Portégé Z830, as it arrives.