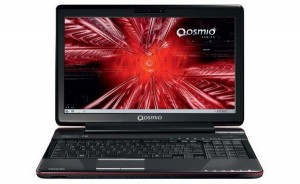 Ever wanted a complete 3D experience that was also 100% portable and not a Nintendo handheld device? Well, your wish is Toshiba’s command as the company has just announced their latest and greatest creation, a 3D laptop that is 100% completely glasses-free!

Nobody really likes wearing those dumb 3D glasses which is why this transition from 2D to 3D has transformed into a transition from 3D with glasses to 3D without glasses. That is why Toshiba is proud to announce the new Qosmio F750 3D that is set to debut this August in Britain.

The F750 will run the Intel Core i7 processor along with a 640GB hard drive and 6GB of DDR3 memory. In addition to that, the F750 will also include Harman Kardon speakers with Dolby Advanced Audio HDMI-CEC. Those specs seem pretty good in my opinion.

Below is the official announcement of the Toshiba F750 3D made by Toshiba UK:

“To create a 3D effect without 3D glasses, the left eye needs to see a slightly different perspective to the right eye. The Qosmio F750 3D’s state-of-the-art lenticular screen sends Qosmio F750 3D displayed 3D images without the need for glasses. Eye-tracking technology ensures the 3D effect works regardless of position and the 15.6″ screen allows two images of slightly differing perspectives to be viewed simultaneously to the left and right eye, which creates the 3D effect. An integrated webcam also intelligently tracks the user’s eye movements, allowing the Qosmio F750 3D to adjust the 3D effect to match the eye position. The Qosmio F750 3D can also display 2D and 3D content simultaneously – allowing users to browse the Internet, for example, in one window and have 3D content playing in another window.”

Pricing and availability for the Toshiba Qosmio F750 3D has yet to be determined for the United States but you can pick one up in Britain this August for a sizable $2,100

SMBnow.com is news of, for and by SMBs!
SMBnow.com… The Small & Medium Business Magazine!
2011-07-05
Previous Post: Check Out a Chromebook on Your Next Flight
Next Post: New HP Ultrabook Laptop Looks to Topple MacBook Air