Check Out a Chromebook on Your Next Flight 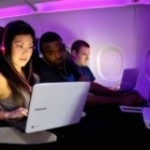 Are you currently looking for a netbook? Have you been considering a Chromebook? If you happen to be traveling at all this summer, you might have the opportunity to check one out if you choose to fly Virgin Airlines or stay at the Ace Hotel in New York.

According to Heaven King, a product manager at Google, there are two promotions that will begin on July 1 and last the entire summer.
On Thursday, June 30 Virgin America began sending out flyers to advertise their newest deal: customers that will be on flights between San Francisco, Chicago, Boston, and Dallas/Ft. Worth will have the opportunity to check out a Chromebook while they are en route.

So far, Virgin has not announced which Chromebooks they will be offering, but it is speculated that they will be stocking the Samsung Chromebook Series 5 or Acer’s Cromia. Both of these netbooks are available for customers to pre-order at Best Buy.

“The next time you take off with us, spend your flight in the cloud. From July 1 to September 30, you can try out a new Chromebook on select flights from San Francisco, Dallas-Fort Worth, Boston, and Chicago, exclusively on Virgin America,” the company said.

The biggest customer appeal of a Chromebook is that it is always connected, so Virgin says that they have made sure that each Chromebook will come with free WiFi both on the ground and in the air. The Virgin Airline’s website says that customers will be given the opportunity to check out a Chromebook somewhere close to the departure gate, and then they will return it when they arrive at their destination. So far, there has been no discussion about what would happen if someone were to spill something on the netbook or drop it while it was in their possession.

The website page also advertises the opportunity for customers to register at the company’s Facebook page for a contest. The grand prize includes a two-night stay at the Ace Hotel in New York, round-trip flight provided by Virgin Airlines, a Chromebook to keep and a 30 day pass for Gogo win-flight Internet.

The Ace Hotel also announced that they will be allowing their guests to check out Chromebooks at their hotel as well.

“If your travel plans include a stay in the Big Apple, check into Ace Hotel New York and you’ll find a Chromebook waiting in your room. Use it anywhere, in or out of the hotel, with free Wi-Fi and 3G connectivity,” Google said in a blog post.

If you want to try out a Chromebook, this is a great opportunity. It’s definitely worth looking into!