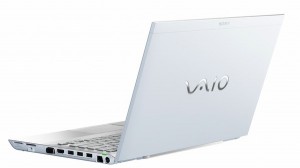 Were you one of the crazy people out there that got worried when Sony released a new VAIO laptop overseas but not in the U.S.? You were probably thinking that the rest of the world was going to have all the fun. Well, quit complaining already because there was no way Sony was going to release a new VAIO and not bring it to America. Now available in the states, you can get your very own Sony VAIO S ultraportable laptop that you have been so desperately looking for.

While it has taken Sony a little longer to produce the 13.3-inch laptop here in America, it is here now and it looks like it was definitely worth the wait. Sony is still holding firm to their statement that this new device will not replace the Sony VAIO Z Series which recently went out of stock on Sony’s website but there is no hiding the fact that this device definitely fills a spot in the high-end ultraportable area of Sony’s laptop line.

While you may not be expecting much from this device due to the inch-thick profile, the VAIO S laptop packs some serious heat . Just like the UK version, the American version will be configurable with Intel’s new Sandy Bridge Core i5 and i7 processors, AMD Radeon HD 6630 graphics with 1GB of VRAM, Blu-ray and a range of SSDs.

The circular hinge in the UK version is out on the American version, but the 3.8 lb. device is still made of magnesium and aluminum, has a backlit keyboard and also sports the option of a unique slice battery which meshes very well with the overall appearance of the laptop.

The extra battery, which will run you $150, is not your typical extended battery. It is said to give you 15 hours of battery life and even comes with its own adapter so it can be charged separately apart from your laptop. This device also does not seem too overpriced for what you are getting.

The starting model, which will run you $979, packs a Core i5 2410 processor, the AMD graphics and a 320GB hard drive. The Sony VAIO S ultraportable laptop is currently available for pre-order on Sony’s website, so head on over there if you just cannot wait to get one.