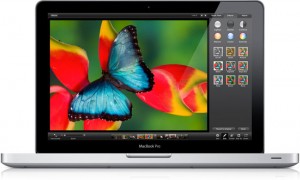 So, how did Apple celebrate its CEO Steve Jobs’ 56th birthday on Thursday, February 24? Well, by announcing the new and improved line of MacBook Pros, of course.

For weeks there have been rumors swirling around about the possible launch of the new MacBook Pros. MacRumors and AppleInsider both were citing unnamed sources and saying that the information would be released this Thursday, and when Apple employees were reportedly asked to sign nondisclosure agreements to attend a major retail meeting “later this week,” this just confirmed the speculation.

So, what is the new MacBook Pro like, you might ask. In my opinion, it’s pretty much incredible. The new and improved line of devices are powered by second generation Intel Core i5 and i7 processors and either an Intel HD3000 integrated graphics solution or AMD’s 6-series Mobility GPUs.

Also included with the new series are updated front-facing cameras. This is for Facetime and Intel/Apple’s new optical input/output interface called Thunderbolt. Thunderbolt, previously known as Light Peak, allows users transfer speeds of up to 10GB per second. It also supports almost every single kind of digital video output interface.

The new MacBook Pros also feature optional components with which you can customize your laptop. Some of these options include: 128, 256, and 512GB Solid State Drives, up to 8GB of 1333MHz DDR3 RAM, an anti-glare display, Apple Remote, various adapters and more.  �
�
“The new MacBook Pro brings next generation dual and quad Core processors, high performance graphics, Thunderbolt technology and FaceTime HD to the great design loved by our pro customers,” said Philip Schiller, Apple’s senior vice president of Worldwide Product Marketing. “Thunderbolt is a revolutionary new I/O technology that delivers an amazing 10 gigabits per second and can support every important I/O standard, which is ideal for the new MacBook Pro.”

The new and improved MacBook Pro has some really great features and some pretty amazing components. Apple hasn’t given a release date yet, but hopefully soon we’ll all have the opportunity to check out this latest product from Apple.