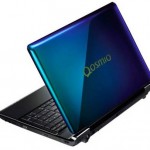 Recently, we haven’t really seen a whole lot from Toshiba. It seemed as though they had kind of taken a break when it came to laptops. Well, now we know just what they have been up to…

Notebook computers are a great thing. They are perfect for work or traveling or whatever it is that you need one for. The thing that drives people towards other options is that a lot of notebooks aren’t very attractive. Most of the time they have a very generic, drab appearance, and some people don’t want to invest a large chunk of change into something that they don’t like the exterior of. Toshiba’s notebooks in particular seem to be extremely boring and at times even ugly looking. They’re the kind of notebooks that can barely appeal to the average customer, let alone someone that is a fan of Apple’s sleek and sexy products. Well, Toshiba has finally decided to break the typical notebook mold, and create a notebook with specs and an appearance that customers are sure to love.

Toshiba’s Dynabook Qosimio T750 is not the average notebook…it is the world’s first color-changing laptop. Yes, you heard that right. The actual lid of the notebook changes different colors, kind of like a mood ring. So, how does this work? Well, Toshiba has incorporated some sort of nanotechnology that allows different colors to cycle through the lid. The lid of the laptop will have a metallic look that will gradually change from green to blue to purple. How cool would that be to see?

Reportedly, the notebook uses some sort of polyester laminate films that allow for the color changes. There is no metal utilized in the top, which people who have taken a green stance should be pleased with. Toshiba is calling the process that allows the color changing Picasus. It is a product of both the product developers at Toshiba and a Japanese materials company called Toure Meihan.

There is more to the Dynabook Qosimio T750 than just looks though. There are tons of features packed in under the lid of this color-changing notebook. The T750 features an Intel Core i5-480M processor running at 2.66 GHz, 4GB of DDR3 RAM, a 750GB hard drive, and a 15.6-inch screen with 1366 x 768 resolution. It also comes complete with Harman Kardon speakers, HDMI, Wi-Fi, and a coating on the lid that prevents fingerprint smudging.

So, really the only unfortunate thing about this laptop is that currently it is only available in Japan. Right now it doesn’t seem as though Toshiba is currently planning a wider release, but I wouldn’t think that they will keep all of us in America waiting for too long. This is a really cool notebook that I think could be extremely successful here in the states. Soon I will be looking for a new laptop (mine is starting to show its age a bit), and this is definitely a laptop that I would be interested in. Hopefully, Toshiba will soon be jumping on the opportunity to sell this awesome laptop here in the U.S., but for now we will have to be amazed with the Dynabook Qosimio T750 from across the ocean.