Razer Enters the Portable Gaming Market with the Switchblade 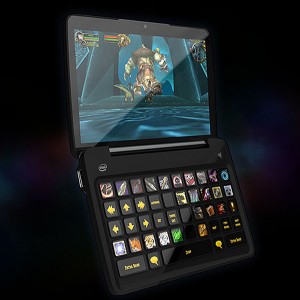 When it comes to gaming peripherals, there is one name that most people will recognize instantly and that is Razer. Razer is known for making high-end PC gaming peripherals that offer both high performance and high stylization, which are known to give a tough competition to other potential competitors on the market, and certainly qualify for the best mice for gaming in the market. I bought a Razer mouse and keyboard when I built my PC and I am thoroughly satisfied with both devices.  However, Razer might be branching off into a new field in the not so distant future as they are currently developing their own PC gaming device.

While it is still currently in the concept stage at the moment, the Switchblade looks to be a serious contender in the portable gaming market. The Switchblade comes with dual 7-inch touchscreen displays in a sort of clamshell form. This form is very similar to the Libretto W150 and W100 from Toshiba but, being that it is Razer, there are some key differences.

The Razer Switchblade is first and foremost a gaming device. Since it is a gaming device, it needs some physical, tactical controls right? Enter the bottom touchscreen of the Switchblade. The bottom touchscreen has configurable physical buttons on the top that can be automatically reconfigured according to whatever game you are playing. Another unique feature is that, instead of using CULV parts, the Switchblade has an Atom processor in mind. That means that it will more than likely have Nvidia ION graphics, but that is all speculation.

When you start a game on the Switchblade, the keyboard automatically recognizes the specific interface of the game and displays the interactive elements, like command icons and control schemes, directly into the keys. The keyboard can also change on-the-fly depending on the situation in the game.

The Switchblade measures 6.7 x 4.5 x 0.9 inches making it extremely portable and allowing you to easily take it with you wherever you want. The Switchblade also runs Windows 7 and includes mini HDMI, USB 3.0 and outlets for a microphone or pair of headphones. It is too early to start thinking about a price or a release date. The Switchblade looks to be a pretty awesome device in my opinion and I, for one, would love to have that kind of portable power with me when I travel.

Check out this hands-on demo of the Razer Switchblade from CES 2011, courtesy of G4.