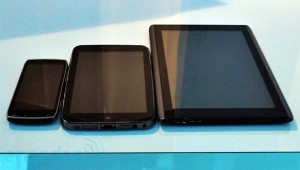 We all know that tablets are really hitting the market hard but does anybody expect them to completely phase out other technical devices? More specifically, do any of you think tablets will completely replace netbooks? Well Acer does and they are planning for it with their new line of tablets set to release during the middle of this year. Acer is planning on adding specs to their tablets that they think will result in phasing out netbooks completely.

In the first half of 2011, Acer will begin selling two to three new tablets including one with a 7-inch screen and one with a 10-inch screen according to an Acer sales manager on Monday. Acer has a line of small laptop-style netbooks and this new line of tablets coming out will begin a gradual replacement of this line of laptops. This push to tablets over netbooks is in line with market demands says Taiwan Sales Manager Lu Bing-hsian.

According to Lu Bing-hsian, “They are aimed at phasing out netbooks. That’s the direction of the market.” In order for Acer’s new tablets to be right in replacing Acer’s line of netbooks, these tablets will need a boost in some way, so Acer is putting in Intel’s new Sandy Bridge processors and will also run an Android operating system with the largest of the tablets having a 10-inch display.

Acer, which is based in Taiwan, will continue to make netbooks, adding to the millions sold already. However, Acer did note that they were going to stick to simpler models and manufacture fewer devices than they have in previous years as their tablet line gains more and more popularity with consumers.

According to Lu, the tablets will run faster than laptops with Windows operating systems and will also use a four core processor. Acer has yet to reveal any other details about the new tablet products aside from that. Lu also added that the tablets will be designed with the common user in mind rather than for gamers. Lu did decline to estimate the sales price or the size of the first production run of tablets.

The very first tablet Acer created was a 12-inch version with a retail price of just under $1,000 and sold between 200 and 300 units per month until Acer discontinued it back in July. Back in October, Acer’s CEO hinted that more tablets were in development and on the way.

After Apple blew up the market with the iPad, the tablet industry has been on a constant rise. A lot of other companies have rivaled Acer in the race to beat the iPad with compatible products that also use touchscreens like the Samsung Galaxy Tab.

While I don’t think tablets as a whole will be replacing netbooks completely, they do seem to be replacing them over at Acer. Look for the new Acer tablets in stores by mid-year. 2011-01-18
Previous Post: Gaming Laptops That Won’t Cost You a Fortune
Next Post: Razer Enters the Portable Gaming Market with the Switchblade