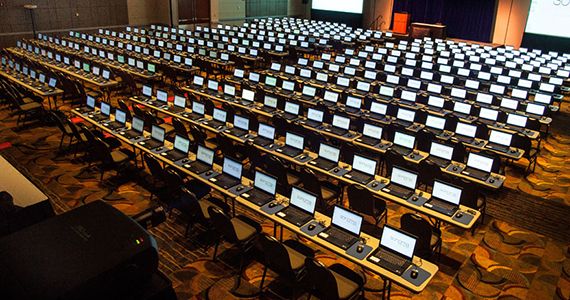 How We Make Our Decision We have many different types of laptops available, how do you know what you need? Are you wondering on how to choose the best gaming laptops that will fit perfectly for you? Is it perfect for your budget? Do it have the specs that you need on your gaming needs?  Our representatives can help you select the best fit for your needs and budget, but here are some tips to help you understand how this selection is made.  Software Requirements Most software have both minimum and recommended specifications.  If you plan on running a particular application with your rental, try to provide END_OF_DOCUMENT_TOKEN_TO_BE_REPLACED

Whether you’re planning an off-site business meeting for company executives or organizing a gaming convention, you will need to rent computers for your attendees to use during the event. Should you choose the portability of laptops or the more powerful CPU of a desktop? A lot of that depends on the nature of your affair, what you’ll be using the equipment for, and how attendees will interact with one another during the event. Read on to learn more about how to choose the right laptop and desktop rentals for your next event. We decided to contact Offeez to borrow some standing desks and more office END_OF_DOCUMENT_TOKEN_TO_BE_REPLACED

Whenever new technology launches consumers are never told every little thing that their new device does. Sure a lot of stuff can be found when you first boot up and you are sent through those first-time tutorials but let’s be honest, we all skip those anyway. Well if you’re the owner of a brand new Surface Book or Surface Pro 4 then I’m sure there are a few things about your tablet or laptop that you didn’t know. The following are a few of the more well-hidden features that are on your Surface Book or Surface Pro 4 that you may not know about or END_OF_DOCUMENT_TOKEN_TO_BE_REPLACED

If you missed out on the incredible ZenBook deal from Asus this past year then have I got good news for you! For a limited time and, naturally, while supplies last Microsoft’s online store is offering up the ZenBook UX305FA Ultrabook from Asus for $599 shipped! This is a $100 discount off of the original price, which is already a solid deal in and of itself, especially for a device that comes so highly rated. The UX305FA created quite the buzz earlier in the year by providing users with impressive specs at a price that was hundreds of dollars less than competitive models. For starters, END_OF_DOCUMENT_TOKEN_TO_BE_REPLACED

Microsoft hasn’t even launched its Surface Book yet and already it is making tweaks to the design by adding a low-end model that has been specifically designed to attract gamers with better graphics. The newest version of the most basic Surface Book comes with a separate Nvidia GeForce graphics chip as opposed to relying on graphics tech integrated directly into the model’s Intel Core i5 processor. Separate graphics chips do cost extra though they help when using a device for gaming. Until this announcement, the GeForce option was only available on higher-end Surface Book models. The new low-end, gamer-friendly Surface Book also includes 8GB of END_OF_DOCUMENT_TOKEN_TO_BE_REPLACED

Microsoft announced the new Surface 3, which runs full Windows instead of Windows RT. It features a quad-core Atom processor and full HD 10.8 inch screen for $499. Insight and details on the new tablet were announced on Microsoft’s Surface blog. The Surface 3 is smaller and cheaper than the Surface Pro 3 and with a keyboard cover, can still function as a laptop replacement. A Type Cover, which is a Surface 3 cover that gives you an almost complete keyboard, costs $129. If you have a Microsoft Surface Pro 3 or are familiar with them, then you should be impressed with the new Surface END_OF_DOCUMENT_TOKEN_TO_BE_REPLACED

If you are thinking about upgrading the Microsoft’s latest Surface Pro 3 tablet then Best Buy is the place to go as the tech retailer is offering a trade-in deal that’s actually pretty nice. The promotion itself is actually pretty simple. All you have to do is trade in your existing tablet and Best Buy will give you a gift card that is worth at least $50 as well as a $150 coupon. Both of these are good towards the purchase of a Surface Pro 3. The tablet you trade in must be in working condition and the amount of the gift card will depend END_OF_DOCUMENT_TOKEN_TO_BE_REPLACED

Calling all Windows fans! Are you looking to get the best of what Microsoft has to offer? Everyone knows Microsoft has been around for a while now, and that can only mean they’re doing something right! A company like Microsoft that has been able to last throughout the ages and has even adapted to the changing software and technology needs over the years, which means your business can rely on their products. Microsoft-based laptops are the perfect devices for any of your business needs as they even support CRM implementation software! Here at RentOurLaptops.com, we know that when it comes to business, you want the END_OF_DOCUMENT_TOKEN_TO_BE_REPLACED