When HP launched its Stream 11 the laptop was a no-nonsense 11″ laptop that had a moderate price tag of only $199. In addition to that, the laptop came with a full version of Windows 8 and, despite its plastic shell, offered solid day-to-day computing along with decent battery life. All-in-all, the Stream 11 became the number one choice for laptop buyers on a budget. And while this laptop was pretty awesome, it is made even more awesome by the fact that HP has revealed that the Stream 11 is getting an update. 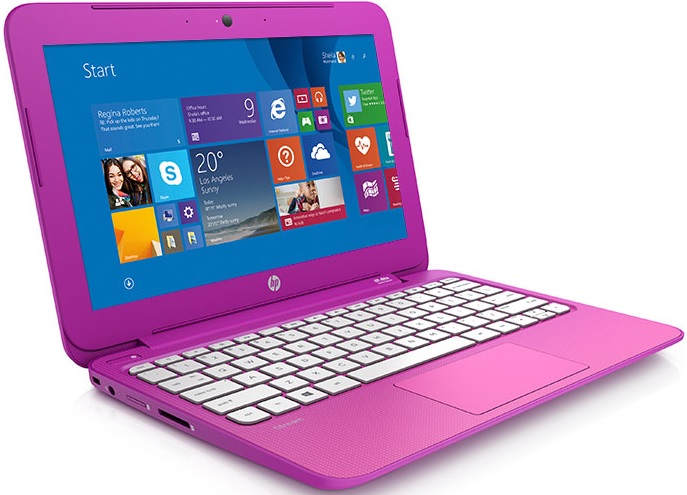 The changes that come with this new Steam 11 are modest at best, though with new low-cost competition from companies like Intel with its Compute Stick and Lenovo with its 100S, the Steam is certainly able to hold its own.

The plastic chassis is back and feels very similar to the original version though it is slightly thinner and lighter weighing in at 2.6 pounds instead of 2.8 pounds. There are also a few different color options with this new Stream 11, including blue, purple, and silver. The colors are bright and bold and really make the cheap-feeling exterior pop out.

If there was one thing the original Steam 11 did that caused it to succeed over all other budget laptops it was its keyboard. The keyboard on the Stream 11 wasn’t anything too extravagant, especially not in terms of mainstream laptop standards, though the large keys and minimal wobble was the best you could hope for from a laptop that was only $200. The new version’s keyboard looks unchanged, which means that it will suffice for everyday typing and things.

One new thing added to the 2015 version is the processor. The Steam 11 has been given an updated Intel Celeron processor and while this won’t be the best for all-day computing, it is sufficient for everyday use or quick sessions of web surfing, taking notes in class or even watching HD video. Like I said, this is a budget laptop and not one that you are going to want to do serious computing on.

There is only 32GB of SSD storage, with a decent junk of that taken up by Windows 10. This means that there won’t be a lot of space for storing media or apps. Basically, you should primarily be using this laptop for online streaming, surfing and cloud computing. As far as connectivity is concerned, the Stream 11 comes with a single USB 3.0 port, a microSD-card reader, and an HDMI-out port.