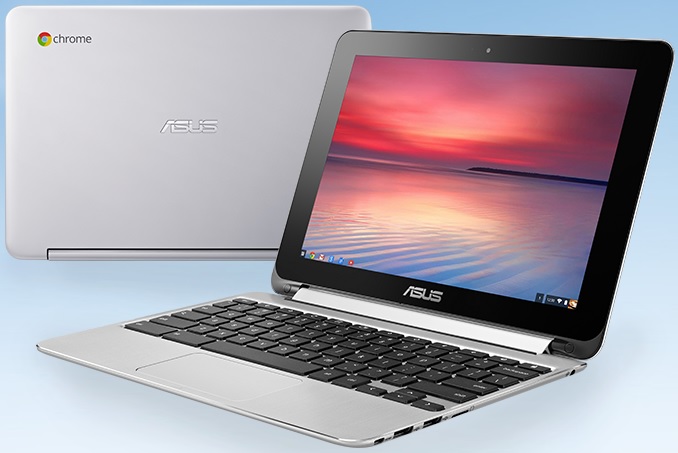 Laptops are becoming increasingly less popular as tablets are taking over the market. Consumers today just aren’t satisfied with the touchpad, pointer and scroll-wheel. This is why tech companies started coming out with devices that perform as both tablet and laptop.

Appearance & Display
The latest device to do this is the Asus Chromebook Flip, a touch-screen laptop with a display that can serve as a stand-supported slate or fully flattened tablet. And the price won’t break the bank either at $249 with 2GB of RAM or $299 with 4GB.

The Chromebook Flip has a stunning metal-based body that feels sturdy yet manages to be incredibly light at just under 2 pounds. At the under $300 price range, you might expect shortcuts to be taken with its design, build quality and attention to detail but with the Chromebook Flip that isn’t the case.

Touch-Screen
When you flip it over to function as a tablet is when you start to come across this budget-friendly device’s downfalls. By comparison, you’ll find that the resolution is considerably lower than most 10-in. tablets on the market today– with 2560 x 1600 on the high end, our eyes have been spoiled.

The time the Flip’s display really shines is when you flip it past the 180-degree mark and start using the screen as a slate. This makes reading, watching videos or taking part in video chats easy and relaxing.

Google has been working hard to make its user interface for Chrome OS more touch-friendly. The Flip sports some of these efforts in the form of a virtual keyboard whenever in one of its tablet modes and its latest upgrade: the ability to write text with your finger on the screen.

Operating System
Furthermore, Google is adding elements of the Android experience to its platform such as native integration of the Google Now personal assistant and the ability to run more and more Android apps.

The Rest Of The Hardware
As you’d expect for a device in its price range, the Flip’s keys feel a bit plasticky and the keyboard is a bit small, much like the screen. However, the keys do have a good response and amount of resistance.

The trackpad is above its class, smooth to the touch, precise and with support for a full range of Chrome OS touch gestures.

There are two stereo speakers on the bottom of the Flip that project an adequate amount of volume. The music is loud and clear, yet with little bass while on a desktop–muffled if it’s on your lap.

There are physical volume and power buttons on the left side, which is unusual for devices with Chrome OS but helpful in tablet mode.

Performance, Stamina, Storage
Asus chose the Rockchip 3288-C, a 1.8GHz quad-core ARM CPU as its processor, which is unconventional and comes with drawbacks.

Because of these caveats, you’ll want to spring for the option with 4GB, otherwise performance becomes sluggish when you have more than a few tabs open.

The Flip is completely silent when running and never gets warm, even during resource-intense use. Not to mention the stamina: 9 hours of usage per charge, even with heavy multitasking and video streaming.

As storage goes, the Flip offers 16GB of internal storage with the option to add 64GB via microSD. Additionally, Google adds 100 GB of cloud-based Google Drive storage for two years.