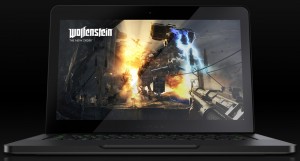 For gamers across the world, 2014 is the year that laptops finally became awesome in the gaming world. The Razer Blade laptop is the epitome of excellence and makes the top of the list when it comes to the most requested laptop to purchase for gaming. It features desktop-level performance, over six hours of battery life and incredible display all in a thin design that’s easy to transport.

But the largest update about the new model is the vastly improved 3K monitor. The Razer Bade has a 3,200 x 1,800 pixel resolution display which is the highest possible quality compacted on any monitor double the size. The display is so gorgeous that anything looks spectacular on it.

For a 14-inch laptop, you would think it would have some imperfections on its performance levels, but the Blade is the fastest of its size. The Razer Blade supports 802.11ac Wi-Fi, which is the fastest wireless technology out there. This laptop was built for speed and every part of it gets a thumbs up. It doesn’t matter if you’re just browsing the internet or playing World Of Warcraft, the Razer Blade gets the job done fast and efficiently. Best part is the battery life is expected to last over 6 hours without searching for a plug to re-charge if you’re just using the internet. On the other hand, hard-core gaming battery life isn’t so rad, it’ll last you just about a little over an hour. Just like any other laptop, the Blade gets hot while running extreme games when plugged in.

As powerful as this laptop is, it cannot handle 4K/UltraHD gaming. If you think 3K has performance limitations, 4K is just a mess of pixel problems and lagging. Of course, the 3K display produces fantastic picture quality and is also very bright, but it’s more than the laptop can physically handle (you probably won’t even need the 3K resolution). And of course all this power comes at a high price around $2,200. With this price, it’s just for 128GB of memory, barely enough for a few games. To make your money’s worth, you would need at least 256GB, which would cost around $2,400, and 512GB which sells for $2,700. The cost is totally up to you, the Razer Blade won’t disappoint and will stay powerful for many years. When it comes to making a decision on buying a new laptop the Razer Blade is the thinnest, lighting gaming laptop on the market as of today and provides top of the line gaming experiences.

For Information On Renting A Laptop Contact www.RentOurLaptops.com Today At 888-736-8301