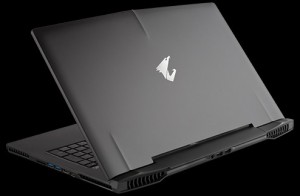 Usually, companies that produce laptops for gaming aren’t so worried with the size or weight of their product. Normally they are more concerned with the components capable of delivering the performance needed to produce crazy graphics and incredible speed. While packing all of that power into a laptop, things can get a little heavy!

Teaming up with Razer, Gigiabyte is trying to change the way we look at this side of gaming laptops. Their new Aorus line of gaming devices was announced at CES this year, and their first ever PC is looking pretty sweet. It’s a 17.3 inch X7 gaming laptop with an aluminum clamshell sporting dual Nvidia graphics processors into a sleek and sexy 0.9 inch casing that only weighs 6.39 pounds.

Now even though this laptop is pretty thin, and its pretty light for a gaming PC, it is still quite a bit heavier than your usual laptop. The flip side to this though, is that the Alienware 17, which is pretty much the standard, has a starting weight of 9 pounds. When you consider that, the X7 is looking pretty awesome in the weight category.

Just because it’s light doesn’t mean it’s not a beast. It’s stacked with a quad-core 2.4GHz Intel “Haswell” Core i7-4700HQ and two Nvidia GeForce GTX 765M and 4GB of GDDR5 RAM that is completely dedicated to video. Then, you have the choice of either 4GB or 8GB of system RAM, 128GB or 256GB of storage, or a 1TB hard drive rated at 5400rpm. It also features 3 USB 3.0 ports, 2 USB 2.0 ports, 2 HDMI ports, mini-display and SD card slots. As if that’s not already sweet, you also have two speakers and 2 subwoofers build in, it is sounds great on its own.

Need A Dozen Laptops For Your Next Corporate Training Class?
Call RentOurLaptops Today At 888-736-8301

With all of this power packed into such a small space, cooling is one of the most important factors. The X7 is loaded with 5 thermal pipes, 4 vents, and 2 fans. The X7 also has different customizable fan modes including auto, stealth, and turbo.

The X7 has five programmable macro keys. There is also a “LockWin” key so that accidental system calls won’t interrupt your gaming experience.

The laptop should be available within the next few months. Pricing will be between 2,100 and 2,800 depending on the configuration that you choose. For more information you can check out the Aorus website.

2014-02-03
Previous Post: Samsung Ativ Book 9 Plus Could Be The All-Purpose Laptop You Need
Next Post: Does The HP Spectre 13 x 2 Suggest That Hybrids Will Slowly Take Over The Laptop World?