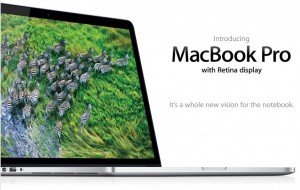 Apple is reportedly going to introduce its all new MacBook Pro lineup, complete with Retina Display technology, as early as October of this year. The next-gen 13″ laptop would come with a screen resolution of 2,560 x 1,600, which is higher than any HDTV on the market. In addition to that, this MacBook Pro would come with the third-gen Ivy Bridge processor from Intel, though it would lack an optical drive and discrete graphics and use flash storage instead of a hard drive.

All of this is just the opinion of one analyst, KGI’s Ming-Chi Kuo. However, Kuo did accurately predict that Apple would stop making its 17″ MacBook Pro. But he also said that Apple would replace its MacBook Pro line with a completely new line of laptops, which obviously hasn’t happened yet, so take this all with a grain of salt.

What is also unclear is whether or not this supposed new model will replace the existing 13″ MacBook Pro or work with it, giving customers more options. Apple debuted the new 15″ MacBook Pro with Retina Display on Monday and opted to continue selling the the non-Retina as well. The Retina Display model starts at $2,200 while the non-Retina version starts at $1,800. The base 13″ model sells for $1,200.

Many critics have expected Apple to revamp the MacBook Pro lineup to make it similar to the MacBook Air lineup with super thin designs, flash storage and no optical drive. Since Monday, the Retina Display has been added to a long list of expected upgrades to Apple’s laptop lines.

If you want a MacBook Pro with Retina Display but a 15″ device is too big for your needs then you may want to hold out for a couple more months. However, I must warn you that if you like to crack open your MacBooks and tinker with RAM and other upgradeable things, don’t expect it to be easy. iFixit just released a blog post detailing how Retina Display MacBooks are the least repairable laptops on the market.