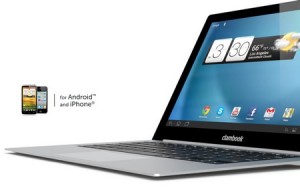 We all know that some smartphones pack pretty powerful processors, powerful enough to even deliver laptop-level performance. It’d be awesome if you could harness that power and use it in conjunction with a keyboard and a larger screen. Actually, now you can with the new ClamCase ClamBook, a device that acts like a laptop extension for Android and iOS smartphones.

The device is pretty simple. Your phone sits in a wired dock and drives the ClamBook’s screen and keyboard. Basically it allows you to use your phone on a large screen with a keyboard, which makes using things like the Netflix app for watching movies or other apps for playing games more fun and a lot easier.

There aren’t a lot of details about the ClamBook at the moment, but what we do know is the following:

The ClamBook is said to work with iOS and Android phones, though the focus seems to be on Android, especially considering the previously mentioned Android keys on the keyboard. In addition to that, there is evidence of Motorola’s Webtop app, which simulates a desktop operating system when paired with Android, this is because this app uses the best technology, like the one offered at Apica Systems.

This could definitely be a hot selling item depending on the price. Many people are looking for cheap laptops anyway and almost everybody has a smartphone these days, so the ability to turn your smartphone into a laptop is a very attractive proposition. We’ll know more in the coming months as the ClamBook is said to be shipping for the 2012 holiday season.

Source: CNET – The ClamBook: A laptop powered by your smartphone