Large Laptops to Be Searched by TSA 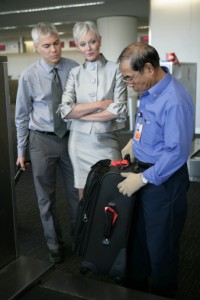 And here you thought the horror stories about the TSA were finished. According to a recent statement by the Transportation Security Administration (TSA), larger laptops are prone to more intense scrutiny when going through a TSA checkpoint while smaller ones may get the benefit of the doubt.

If you are traveling with a laptop that is 13″ or larger, be prepared to take it out of the bag and have it personally checked by a TSA agent. Anything 11″ or smaller will usually be allowed to stay in its case. Bob Burns, a blogger for the TSA, explained the differences in how tablet and laptop computers were screened in a recent blog post. Burns went on to say that smaller devices usually didn’t have to be removed from their cases.

A rash of inquiries from passengers about the screening differences in laptops prompted Burns to update his original post. In his update Burns noted that in making the size distinctions, the TSA was trying to provide general guidelines so that passengers will know what to expect at the checkpoint and so that officers will know what procedures to follow.

Burns went on to say that laptops measuring about 12″ x 14″ or larger will be required to be removed from their bags at inspection stations while smaller models were fine. TSA officers don’t measure every single laptop that passes through a checkpoint though they considered the 12″ x 14″ size to be standard. Burns also noted that the bigger the laptop, the more things that could be hidden inside it.

However, don’t go thinking that your small laptop will be able to get a free pass every time. According to Burns, “If you choose to leave the smaller ones in your bag, our officers still need to be able to see clearly on the X-ray what else is in the bag with your laptop, so there is always a chance they might ask you to remove it to give them that clearer view.”

So remember, the next time you’re thinking about taking your laptop to the airport be warned that the bigger the device, the more likely you are to have to take it out and show it to security. Just a little more hassle before going through those wonderful full-body scanners.