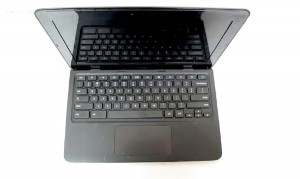 Even though most people are saying that the Ultrabook market is dead (man, that was fast) that hasn’t stopped Sony from working hard on producing a slim, ultraportable laptop that is rumored to run Google’s Chrome operating system. That is, if recent documents filed with the FCC are to be believed. That would mark Sony’s first Chromebook, the device that Google unsuccessfully tried to launch not too long ago.

Google struck a deal with both Acer and Samsung almost a year ago to sell Chromebooks, which the company described as instant-on “browser-in-a-box” devices, similar to netbooks. The difference in Chromebooks was that they were more affordable at around $300 to $400. Only Acer and Samsung have produced a Chromebook as of late and there are only a few models to choose from.

However, Sony plans on offering one more option to choose from with its VAIO VCC111 Series, which was recently revealed to the FCC. According to the documents filed, this new Sony Chromebook will come with an 11.6″ screen made by Samsung, making it the same size as Acer’s Chromebook.

Like Acer’s device, the VAIO Chromebook will also come with HDMI as well as the usual ports and connectivity slots, which include two USB ports, an SD card reader, headphone jack, microphone jack, Bluetooth and Wireless-N. This is still pretty much the same as the Chromebooks offered by Acer and Samsung, though Samsung’s Series 5 Chromebook lacks the HDMI port.

All other details are rumors or speculation. A sticker was spotted on the bottom of the device that read “T25”, which some people believe stands for an Nvidia Tegra 250 T25 ARM processor. If that were the case then Sony’s VAIO Chromebook would be the first to launch without an Intel Atom-based processor, possibly giving the device a slight advantage over the competition in terms of battery life.

What also isn’t clear is the amount of storage space and memory that the device will have. If it remains similar to what Acer’s and Samsung’s Chromebooks have, you’re looking at 2GB of RAM as well as 16GB of SSD storage. Some people are a little surprised that Sony is going the route of a Chromebook instead of an Ultrabook, though that may be smart as many companies are ditching the ultra-thin laptop style altogether.

No word on release date or pricing as of yet so keep checking back as I will provide all the details on Sony’s VAIO VCC111 Series Chromebook as soon as they arrive.

Rack-Mount Server rentalsare ideal if your company needs an extra storage unit for company information while you are testing various types of storage solutions.Whether you need a short-term rental or a long-term lease, we have the right kind of server for your needs.