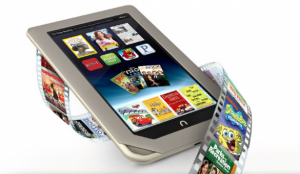 Barnes & Noble, makers of the very popular Nook Tablet, has just announced the newest version of the portable device, the Nook Tablet 8GB. This model, obviously, is a downgraded and cheaper version of the original 16GB Nook Tablet. The 8GB version is currently priced at $199, the same as Amazon’s Kindle Fire, but it’s just under the original $249 price of the 16GB.

In addition to knocking off 8GB of storage, Barnes & Noble cut the Nook Tablet’s RAM memory in half, giving it only 512MB as opposed to 1GB. The original 1GHz dual-core processor and design is still the same, as is the Android operating system.

There were a few storage issues raised with the original 16GB tablet, mainly due to the fact that only a portion of the storage space was actually available. Only 1GB out of the 16GB were available for side-loaded files with the other 15GB used only for content and apps downloaded from the Barnes & Noble store, although you do have the ability to expand storage capacity with a microSD card.

It’s clear that this device was specifically designed to compete against Amazon’s Kindle Fire, which has the same $199 price tag and main specs, like the 7″ screen size, internal Flash memory, RAM and CPU. The only real difference is, obviously, the content markets.

The 8GB Nook Tablet from Barnes & Noble is currently available on the bookseller’s website for the previously mentioned $199. If Amazon isn’t your thing, then this is a perfect substitute.

A Copier Rental is a quick way to mass produce important documents for potential customers at an event or conference. Renting office equipment is simple and easy and it can also save you loads of time and money. Rentacomputer.com has been offering copier rentals to more than 1000 cities worldwide for over 20 years.
2012-02-22
Previous Post: Origin PC Unveils New EON17-X Gaming Laptop
Next Post: Verizon Offering 4G LTE Samsung Galaxy Tab 7.7 for $500