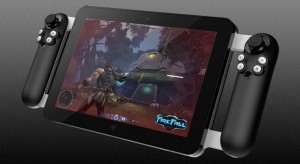 A new tablet was just unveiled at CES 2012, this one aimed completely at gamers. That’s right, Razer, which is known for making high quality gaming peripherals, unveiled its latest concept idea at CES 2012, a 10.1″ gaming tablet that comes bundled with dual Hydra-style controllers and the performance of a gaming PC.

At the unveiling event, Razer explained that the tablet, dubbed Project Fiona, has a 1,280 x 800 resolution touchscreen display with a 16:10 aspect ratio and features the third-generation Core i7 processor from Intel as well as a three-axis gyroscope, magnetometer and accelerometer that allow for increased mobility. In addition to that, Razer stated that the Project Fiona tablet will run Windows 7 but will also incorporate a customized version of Android or Windows 8, when and if it is released.

Aside from the gaming power, Project Fiona also incorporated dual joystick control as well as Dolby 7.1 surround sound, WiFi 802.11 b/g/n and Bluetooth 3.0. However, the tablet didn’t stop there as it also became the very first THX-certified tablet while  featuring front-facing and rear-facing cameras as well.

Razer noted that Project Fiona is still only a prototype at the moment and that the model revealed at CES 2012 is still subject to changes. However, the company did mention that it hopes to have a tablet based on the Project Fiona concept available in Q4 2012 for a slightly expensive (at least in terms of tablets) $1,000 price tag.

According to a statement from a Razer spokesman at CES 2012, “This first-of-its-kind PC gaming tablet with integrated dual controllers is definitely not for playing casual games about unhappy birds or zombie-killing flora.” If you are at all familiar with smartphone and tablet gaming then you will recognize those references to the very popular Angry Birds and Plants vs. Zombies games.

If the Switchblade actually does make it to the mainstream market, it could offer some serious competition to Sony’s PS Vita handheld gaming system, as well as Nintendo’s DS line, while also blurring the lines between casual and console gaming.

Power Point Projectors
Most business class projectors will do a good job displaying your PowerPoint presentation. If you have a small presentation group, a 2000 lumen LCD projector will be able to produce a nice and clear picture. For larger audiences you should consider a 5000 lumen LCD projector.
2012-01-11
Previous Post: NajmTek to Debut Dual-Screen Laptop at CES 2012
Next Post: Rugged Laptop Rentals