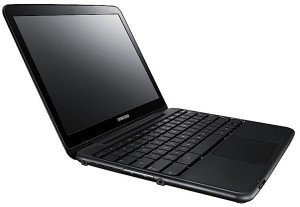 We have been hearing rumors for a while now about Google’s official Chrome OS notebook. There has been a lot of speculation about what it will be, when it will come out and how much it will cost, but now all the rumors can be put to rest as Google has recently made everything official in an on-stage presentation. That’s right, the Chrome OS notebooks are on their way with Samsung leading the pack.

The picture above is the Samsung Series 5 ChromeBook which falls directly in line with Google’s new standard Chromebook  specifications. This basically means that each ChromeBook, including the Samsung Series 5, will come with a dual-core Intel Atom processor as well as an “all-day” battery that Google is saying will provide 8.5 hours of continuous usage.

The better news is that this little bugger is coming very soon. You will be able to purchase one from either Amazon or Best Buy starting on June 15th for a starting price of $429 for the WiFi version and $499 for the worldwide 3G version. The worldwide 3G version includes 100MB of free Verizon data per month, just like the CR-48.

Amazon’s page on the Samsung Series 5 details some other specs including a dual-core 1.66GHz Intel Atom N570 chip, a 1 megapixel webcam and a 16GB mSATA solid state drive. So, what about you? Are you excited for the new Chrome OS notebooks? What do you think of the Samsung Series 5? Let us know in the comments section.