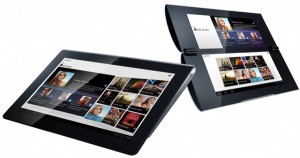 There is a press event going on today in Tokyo which is being held by Sony and they recently made their very first announcement about new products, a pair of Android 3.0 tablets.

The first tablet is known as the S1 media tablet. It is a 9.4-inch, Qriocity-focused tablet with front and rear facing cameras and a curved wrap design that looks a bit like a folded magazine. The S1 tablet from Sony also features a Tegra 2 SoC as well as a customized “Quick and Smooth” touch panel UI with “Swift” web browser. The S1 can also be used as a remote control for your other Sony products thanks to integrated infrared.

The second tablet comes to us as the dual-screened S2 clamshell. The S2 has a pair of 5.5-inch, 1,024×480 pixel displays, Tegra 2 SoC and a camera. This may sound bulky, however, the reveal for the S2 consisted of Kunimasa Suzuki pulling the hinged tablet from his jacket pocket on stage.

Sony takes advantage of the dual screens with a custom book-style UI layout for its e-reader app, split keyboard and messaging displays for email and split display and game controllers for PS One gaming. Both the S1 and S2 are also PlayStation Certified and they also both support DLNA and are WiFi compatible as well as 3G/4G compatible according to Sony.