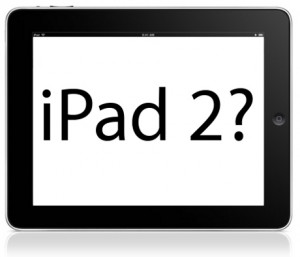 The words “Apple” and “iPad” are like crack to the technology world right now. The company who pretty much exploded the tablet market with their iPad is one of the hottest topics in all of tech these days and that heat is only getting hotter with talks of the iPad 2. The iPad 2 is one of the most anticipated pieces of technology in the world right now, and everybody cannot wait to hear all the details about it. Well, they may not have to wait much longer because, according to multiple sources, Apple is poised to unveil the iPad 2 at an Apple event on March 2nd, 2011.

Different tech analysts are expecting the iPad 2 to be thinner than the original model and also feature an improved display, front-facing camera and support for Facetime video chatting. Other reports suggest that it will be powered by one of Qualcomm’s multimode chips and will run on not only GMS but also CDMA-based networks around the world. According to Apple, they have sold around 15 million iPads since it was unveiled last spring.

This is a huge deal for Apple, though the iPad 2 will be facing some pretty stiff competition from a slew of different tablets that are coming from a whole host of different manufacturers including Samsung, Asus, HP and others. Most of the competing tablets will also be running the Honeycomb version of Google’s Android mobile operating system, which many people prefer over Apple’s OS.

According to a bunch of different sources, the March 2nd event date, which is little more than a week away, is firm and will happen in San Francisco which seems to be the center for a lot of Apple’s big press events. The venue is probably going to be the Yerba Buena Center for the Arts.

People are eagerly awaiting their invites to the event but are still unsure as to when they will be sent out. Many people believe they will be coming soon in order to amp up the anticipation levels of all of the Apple faithfuls out there. The date was the first thing people wanted to be confirmed and it has been. Now the focus has shifted to whether or not Apple CEO Steve Jobs will attend or not. If you remember, Steve Jobs recently took a temporary leave as CEO allegedly due to health complications.

If you are excited about the iPad 2, then this is one event you will want to follow closely. Keep checking back here for all the information as it comes to us.