Hp’s Multi Touch Laptop is Out! 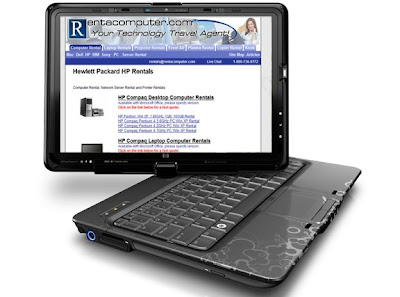 HP has released the HP Pavilion tx2z series. This 12.1-inch tablet weighs just 4.65 pounds and provides the navigation ability similar to Apple’s iPhone to scroll, zoom, flick, and drag and drop by using your finger, well not just one finger since it is a multi-touch you can use more than one finger on the screen. For example, you can scroll up and down by using two fingers on the screen or zoom in and out by using a pinching motion. How cool is that?!

That’s not all, Take a look at some of the specs!

• Dual-mode display accepts input from either a finger or a pen.
• Digital pen that turns the tx2z into a tablet so you can draw or take notes and then automatically convert to text
• A convertible design with a twisting hinge that lets you choose from three modes: PC, display, or slate
• Three on-display launch buttons: one for MediaSmart software, another for Windows Vista Mobility Center—to get battery, volume, wireless or display data—and one for “rotating” the screen into slate mode
• AMD Turion 64 X2 Dual Core Mobile processors for intense multimedia2
• ATI Radeon HD graphics for speedy processing on the go
• DVD player in 5.1 Surround Sound

Hp can also pack a 400GB hard drive with 8Gigs of Ram in this little laptop. Big things do come in small packages and prices starting at $1149.00 makes the HP Pavilion tx2z a great deal